A month or two ago the Lord gave me the desire to read and re-read Jn. 10:1-21 in my private prayers. I am so glad I did because of the fresh insights for my own spirituality and of the Church at large.

The result is that I hope to blog a trilogy on this subject, because there is just so much richness and wisdom for our times in this passage.

FIRST (perhaps rather obviously) we are impressed by the KEY-FIGURE, ‘THE BEAUTIFUL (GOOD, EXCELLENT) CHIEF SHEPHERD.’

The first time I shared something of this theme in Jn. 10 was in the fellowship of a group of believers in the southern Free State (cf. previous blog, ‘A Baptism of Love’), a wild game and sheep farming area. It came to me in that setting that ‘the Father is the sheep farmer and his Son Jesus the chief shepherd of his flock.’ Because most of us as urbanites have lost touch with the pastoral sheep farming world, we need to re-visit this metaphor with the help of the original sheep farmers and those today, a privilege which was mine in the Free State visit. (I guess my Scottish, Australian and New Zealand readers will be able to identify here)

SECONDLY, as we look at the setting of Jn. 10, we are confronted with the contrasting picture of FALSE SHEPHERDS AND FLOCKS.

The implications for today’s ‘Church’ and her ‘shepherds’ are huge. [maybe I should point out that this passage is not only for shepherds (who are sheep also) but for sheep who may as yet not see themselves as ‘shepherds’:  curiously, God distinguishes between mature sheep and stupid sheep! (Ezek. 34:20ff)] [cf. ‘the priesthood of all believers’].

NEXT TIME we shall put the focus where it belongs, i.e. on ‘THE BEAUTIFUL SHEPHERD,’ on his person and ministry and the implications for HIS flock…

Three weeks ago a number of us from Port Elizabeth in the East Cape attended, by kind invitation of a dear brother and fellow-blogger from Bloemfontein in the Free State, a weekend retreat in the southern part of that province. The venue was a sprawling farm house on a game farm, surrounded by grassland and koppies (little rocky outcrops). Counting teens and children we were over 30 folk attending, some from Bloemfontein, some local sheep farmers and then four of us from the Bay viz. Justin, Marthinus, Melanie and myself. The experience itself, for us anyway, was unforgettable. It was ‘organic church’ in action, it was ‘a baptism of love.’ In this instance ‘baptism’ depicts immersion, and love depicts both felt love (as one dear brother put it in Afrikaans, ‘As jy se jy is lief vir my, dan moet ek dit darem redelike kan voel,’ i.e. ‘if you tell me you love me, I should be able to at least feel it) as well as what Francis Schaeffer called the ‘practical, observable love’ of Jesus and his Church.

Having introduced the subject, let me provide four ‘windows’ into the weekend, from four different perspectives and in their own words.

First, Justin’s perspective. I was amazed and blessed by the confidence with which people shared their thoughts about what the Bible said and meant. It wasn’t arrogance, of the kind some flashy churches use to persuade a person. It was the quiet confidence of folk who had been led into these truths through the simple work of the Spirit in their daily lives.

I was blessed by the sensitivity of each person to Jesus’ leading in the gatherings. This meant that we experienced unity as a fruit of Jesus being allowed to lead.

Finally, I was deeply touched and moved by the humble, practical love that was shown by all. I arrived to meet a room of strangers, but I left feeling like I had found more brothers and sisters in Jesus. Thanks!

Second, Marthinus’s perspective. The weekend was unique in that we were almost immediately ‘on the same page,’ having had prior common revelation of the things of Christ and the gospel. Cf. Eph. 1:15-23.

The weekend fellowship reflected ‘a common brokenness.’ Those who participated had obviously been to the cross, been crucified to self and made alive in Christ and to his righteousness. Cf. Rom. ch. 6.

Third, Melanie’s perspective. The large farmhouse had a wonderful homeliness about it. The only sound that could be heard at night was that of the far-off generator providing power. The smell of the veldt made one feel like you were in another world!

Some of the folk attending were hard-working farmers, desperate for rain. Please remember to pray for them. [water-restrictions have been announced as of today]

I’ve been to many retreats but have never felt so part of a family! The atmosphere seemed charged with genuine Christlike love. As people shared, I saw authenticity – no super-spirituality! Folk had gotten past their natural shyness and showed their true emotions. They made themselves vulnerable, which blessed me so much. Big men shared and wept unashamedly – there was a total abandonment to Christ and his love. No pretence, just brokenness.

Everyone supported and edified one another with words of encouragement, and personalised it with great sensitivity.

Fourth, Erroll’s perspective. I have so much to share of the experience, that I’ll put it in point form (I heartily affirm all the things highlighted above, so let me touch on a few aspects not mentioned or expanded on thus far):

One of the passages that emerged on the Sunday morning, among many other momentous and life-changing passages (Acts 20:17ff, etc), was that of the beautiful Shepherd in Jn. 10. God willing, I plan to share some of our mutual discoveries in that passage in the near future.

In closing let me, from my heart, thank my brother Tobie (blogging under Natural Church), his wife and all the saints who made it possible for us to share in their annual retreat! I’m still savouring those tender, tasty Free State lamb chops off the braai… (for non-South African readers, ‘braai’ = ‘barbecue’ on an outdoors wood fire) 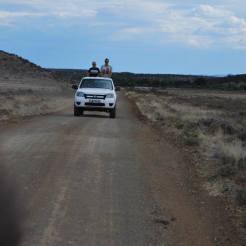